This is an easy way to memorize a deck of cards that combines three methods:

How it works is that each card is assigned three attributes,a Person, an Action and an Object, with the three being connected together, i.e. the person is performing the action on the object.

This is a quick method to memorize cards and is great if you want to remember cards as you play a game and want something you can put into practice immediately.  If you have more time to invest and want to remember a complete deck of cards, then a similar version that uses the Major System, may be better suited for you as this can create more vivid images which helps make them easier to remember.

This system combines words that start with a consonant in the names of the suit (plus V & W for Hearts and K for Clubs) with a rhyme of the number, so words begin with:

Then rhyme with e.g. One, Two, Three, etc.  A couple of exceptions, 7's rhyme with "Sept" which is the French for 7, pronounced "Set" and some words end in an "er" sound, which is ignored.

There are 3 variants for each card - the Person, Action and Object, as explained underneath the table.

To help remember the Person, Action and Object associated with each card, read through the above table and visualise each scene with as many sensory pereceptions as you can and full movement.  How does it look, sound and feel?  Does it have a taste?  Visualise each card in the deck with the associated person, action and object.

Memorizing cards 3 at a time

If you've got a deck of cards in front of you then choose 3 cards at random.  If not, just pick 3 cards at random by pointing to the table above.  The clever part of the Person, Action, Object method is that you then visualize a different combination based on the cards chosen.  Here are 2 examples with 3 cards each:

Imagine a pack of wolves howling as they clean a bottle of wine.  Smell the disinfectant and wine.

Imagine a vet signing a coffee machine on a vet's table. Picture the hand movement and smell the coffee.

Once you've memorized the image, converting it back to the three cards is simple, for example: Pack Clean Wine

To memorize all the cards in the deck including both Jokers you have to remember 18 images.  Make them as vivid as possible, with movement and use all the senses.  Rude, ridiculous images work best. 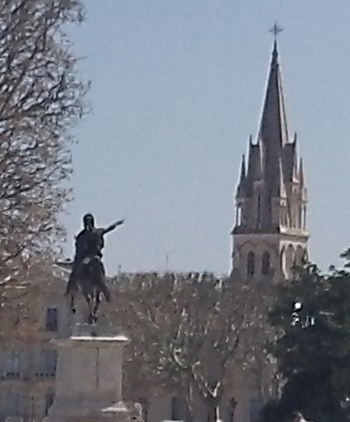 Each of the 3 playing cards will always be stored in the order of Person, Action, Object (PAO).  To remember a long string of cards it works best to use a Memory Palace.

A Memory Palace doesn't have to be an actual palace, it can be a room in a house, a route you travel on a regular basis, an apartment or house you know well, or any physical location that you know intimately.

Start at an obvious starting point in the location (for example a post box on the end of a drive) and imagine the first scene taking place there - in this case a pack of wolves cleaning a bottle of wine.  Perhaps the wolves are resting precariously on top of the post box, or perhaps when you open the post box, you see all the wolves squeezed in there.  This makes it easier to remember than if they're simply standing next to it.

Go to the next location in your journey, for example the front door.  This has been ripped off its hinges and is now being used as a vet's table by the vet to sign all that coffee.  You duck under the table and past the vet's legs and all those spilled coffee beans to enter the house.  Putting yourself in the picture like this also makes it more memorable.

Your Memory Palace will need at least 18 distinct locations in it, ideally connected in an obvious way (locations on a journey, points on the edges of a room, so the order is obvious, etc.)  If you have a deck of cards with 2 Jokers to memorize, you'll need to pair 3 cards with each location.