We'll be launching the Funny Feeling Party Game later in 2018.

In the meantime you might like to play the online version of the game which can be played by 2 players and up who are in the same room using a computer, mobile device or tablet.

Scroll down for a text version of the rules. 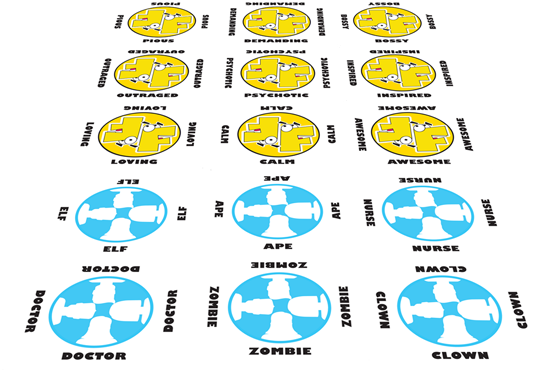 Spin the spinner, whoever it points to starts. They are the Performer.

Every Turn the Performer …

At the end of the turn, place any Feeling or Role cards chosen or guessed at the bottom of the pile and replace them with new cards so there are always 9 Feelings and 6 Roles visible. Play then moves clockwise with the next person on the Performer’s left becoming the new Performer, or for odd numbers, the next player in the other team. 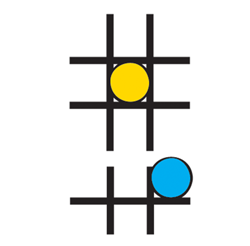 Do and Say/Sing cards have a ‘map’ which shows which Feeling &/or Role to act.  The inside circle of the spinner shows whether to do a Feeling or Role.  In this example if the spinner points to:

The team shout out suggestions and discuss the answer but the Chief has the final decision and chooses a Funny Feeling &/or Role card by picking it up.

Each turn one player is the Performer and any other player can cover one card with their hand to choose it, or in the case of Combo cover a Funny Feeling and a Role card at the same time.

If another player wants to choose the same card, they can cover someone else’s hand with theirs (they can ask to see the card underneath). Once a card is covered, you can’t change your mind!

Points are awarded to whoever guesses correctly, with the bottom hand receiving 2 points per correct guess (i.e. 4 for correctly guessing both cards in a Combo) and covering hands earning players 1 point per correct guess.

The first team / individual to 15 points wins the game.

It’s natural to make noises when acting and move the body when singing, so if these don’t give away the answer, just ignore them. If they give a massive clue, the Performer should take another card and restart.

Depending on where you’re sitting, it’s sometimes easiest to identify the Feeling / Role you need by turning your card round so the map matches the layout on the table.

If you want to make the game easier, you can: